Flip Holding Ltd is delighted to announce the promotion of Yousef Tuqan Tuqan and Mohammad Itani as CEOs for Flip Media and Neo Digital. 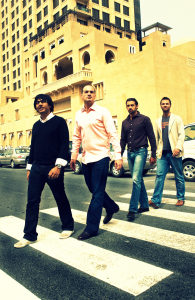 Yousef Tuqan Tuqan has been promoted to CEO of Flip Media, with overall responsibility for the development and growth of the largest interactive agency in the Middle East. An industry veteran with over 11 years of regional experience, Yousef has served as Account Director at Flip Media since 2005, and has been responsible for business development and client servicing for the agency.

“Yousef has been one of our most vocal ambassadors, and has played a leading role in growing our agency into a global network of 150 dedicated Internet professionals. His passion and experience have been invaluable in maintaining our leadership position, and this promotion is a vote of confidence in his ability to lead Flip Media into its next phase of growth,” said Managing Partner Dinesh Lalvani, Flip’s cofounder.

Mohammad Itani has been promoted to CEO of Neo Digital, Flip’s sister agency and the first dedicated online media agency in the Middle East. Mohammad has served as Head of Media since 2005, and has been instrumental in the growth of the agency and its reach beyond Dubai. He has also been involved in the development of Neo Digital’s Search Engine Marketing team, which boasts 4 full-time specialists and one of the largest booking volumes in the region.

According to Flip Holdings’ Group CEO Martin Diessner, “Mohammad has shown great leadership in times of ongoing change in the industry, and has earned the respect and admiration of his clients, his team and his partners across the online media landscape. I am confident that Neo Digital can continue to maintain its position as the fastest-growing and most innovative independent online media agency in the region.”

Managing Partners Dinesh Lalvani and Martin Diessner will continue their daily involvement in the group’s operation from Dubai, with a greater focus on the development of Brand Central, the most powerful enterprise-class advertising management and serving solution in the Middle East; and Chameleon, Flip Media’s complete website content management solution.

According to Dinesh “these key promotions represent a vote of confidence in Yousef and Mohammad to continue to lead their agencies into their next stage of development. Both have been the faces of Flip Media and Neo Digital since their appointment in 2005, and we are proud to work alongside them as we continue to offer the best and most comprehensive digital marketingsolutions in the region.”