Flip’s own Head of Delivery, Paul A. Zwarts (aka Paz) has been a DJ and producer since the early 1990s. Having lived and played in Toronto, Amsterdam and Dubai, Paz now has teamed up with partner in crime Marko Ben-Aicha, aka Smokingroove. The dynamic duo have started their own record label called Mixtura Records which looks towards supporting a very small scene in Dubai which is oriented around genres like Chicago House and Drum & Bass. 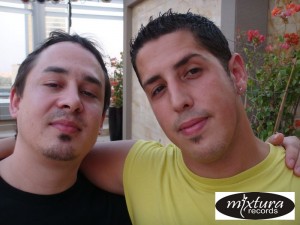 Mixtura is derived between the word “Mix” and the Portuguese word “Mistura” which also means mixed. Paz & Smokingroove are making headway in their industry for their themed releases which have so far covered infused styles like 40’s Swing and Latino/Brazilian sounds.

Having already released two Eps which are Ethnic/Brasilian oriented, these two music makers are teaming up with several artists including Flip’s own Mazen Abou Hatab (aka Meezus).

The future is looking bright for these guys as they aim to create music, sell online and get into new and interesting markets like video games and television scores.

“Our music is not for the masses. Although we are very open to all types of music, we are very much aware that Dubai is about pop culture. There happens to be a lot of people here who dont agree with this. Our job is to meet that in ways that compliment our own tastes and experiences.” says Paz.

“There are places opening up in Dubai that are thinking about format and music more than fancy display and expensive budgets. This kind of thing is dying with the credit crunch and we can no longer treat music as pure vanity and wastah. Our music definitely reflects this attitude.”

Recently Hive, a very chic yet down to earth bar, restaurant opened in Souk Al Bahar. Mixtura’s Smokingroove is a resident there, supported by Paz.

“You’ll find us playing our own wares and styles similar at places like Hive and Alphaclub which appreciate that music is about mood and format, rather than yet another place to listen to top 10 hits which are found on your car’s radio.”

All in all, niche thinking is the way to survive in the present economy and idealizing where specific markets exist will ensure longevity. Flip Media, prided in it’s thinking towards web-based business objectives is proud to know that this kind of mentality is transcended into a Flipper’s way of life rather than just a job.

You can listen and find out where to buy all digitally released music on www.mixturarecords.com.