The task for the day was to make a router based on Linux. All I wanted to do is to replace the stupid home based router and do a fully Linux based one. Round one we need to buy hardware for the router. I know Linux can run on very low configuration hardware but those are very hard to find in the market. So I decided to go with shuttle computers. Basically shuttle computers are small and compact when compared to normal desktops. The model number used to make this one was SD32G2. You can read the complete specification of the hardware form this website. There is an on board gigabyte Ethernet controller. 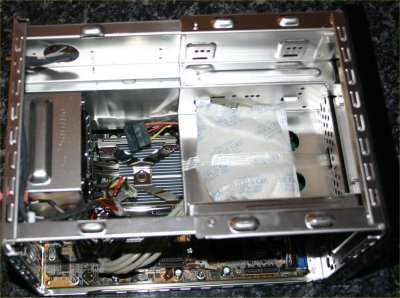 Other than that I used the following

Now the system is ready to rock and roll. The next big step was to install some flavor of linux and test the firewall. I was thinking of fedora latter my friend Lijeesh showed me some new variant of linux which are there only for this purpose routing and firewall solution. Some distribution which are done for routing purpose are

I installed and tested in the same above mentioned order. And I found some issues with each installation. Let me explain the hurdles I faced in each.

IPCOP – The installation was smooth. I had some issues in setting up my on board Ethernet card. Basically it was marvell chipset. I tried installing sk98lin drivers for it and it wont work. Then the firewall not supporting NAT.

Smoothwall – The installation was smooth. It even detected the on board Ethernet and it worked. It had really a good web interface with funky ajax effects. Like live bandwidth monitor, live messenger chat viewer etc. But when it comes to routing features the was very much limited 🙁 . One such problem was it didn’t NAT routing.

Clarkconnet – It is a commercial solution. It is based on red hat distribution. I had some issues with my onboard ethernet card. It was detecting it but the drivers was not working. I had to issue command “modprobe sk98lin” and everything worked well. It had all the routing features please features. I tested it well and it was stable. Currently I am using this for my routing solution.

It took me 4 days to figure out the best options for routing solution based on Linux. I am not sure that the above conclusion are 100% correct. May be I have screwed it up somewhere. But it was fun experimenting 😉