Once Apple announced about the new product iPad everyone is so angry for not supporting flash in the device. Apple is not completely avoiding flash. It is not supporting Flash in mobile devices like iPhone and iPad. I am truly in support with Apple on this as Flash is resource hungry. Supporting this technology will really give the end user a very bad experience. I have used flash on Netbook and trust me it is really a resource hog. It will make your Netbook totally not usable. I was not able to do get any good experience with all the site which Adrian Ludwig mentioned on his blog post “Apple’s iPad — a broken link?“.

Today morning I read this article on Shufflegazine “Is Apple turning evil?” and trust me I got angry. Why is the everyone complaining Apple for not supporting flash and they call it evil ? Give me a break. I am sure Tom Gara from The National was not sure what he was talking about.

Today I did a test on Macbook Pro to check how much resource a flash application can take. You will be surprised to see it takes more processing power than windows running in a virtual machine. 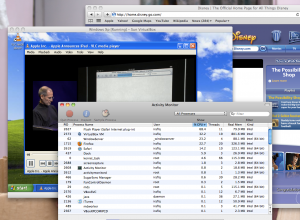 About Adobe: They are lazy, Jobs says. They have all this potential to do interesting things but they just refuse to do it. They don’t do anything with the approaches that Apple is taking, like Carbon. Apple does not support Flash because it is so buggy, he says. Whenever a Mac crashes more often than not it’s because of Flash. No one will be using Flash, he says. The world is moving to HTML5. – iClarified

I guess Apple is so true with their statement. Lazy Adobe fix your flash than complaining 🙂