Flip Media Dubai launched a new portal mumbaikar.com for mumbaikars. The site was launched in beta stage and we are updating the functionality and features of every day. 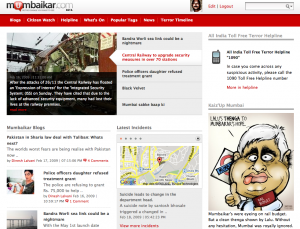 Mumbaikar is the Marathi word to signify a resident of Mumbai. Even though the term has been in use for quite some time it gained popularity after the formal renaming of the city to its original name Mumbai[citation needed]. The renaming and rise in the popularity of the term led to common adoption of the term Mumbaikar. Generally speaking, the term encompasses a whole range of ethnicities and cultures of which Mumbai is a melting pot.

Its a general practice in Marathi language speakers to add the verb kar (which means do or does) to the end of individuals native village/place of residence and refer the person using it. So based on this general rule natives of Pune city are called as Punekar, Nashik city as Nashikkar and so on using. It is also fairly common to find people who have their last name based on this rule, so some natives of Goregaon do have their last name as Goregaonkar, similarly Chiplunkar from Chiplun and so on. Similar surnames based on profession with a kar at the end are also very common.